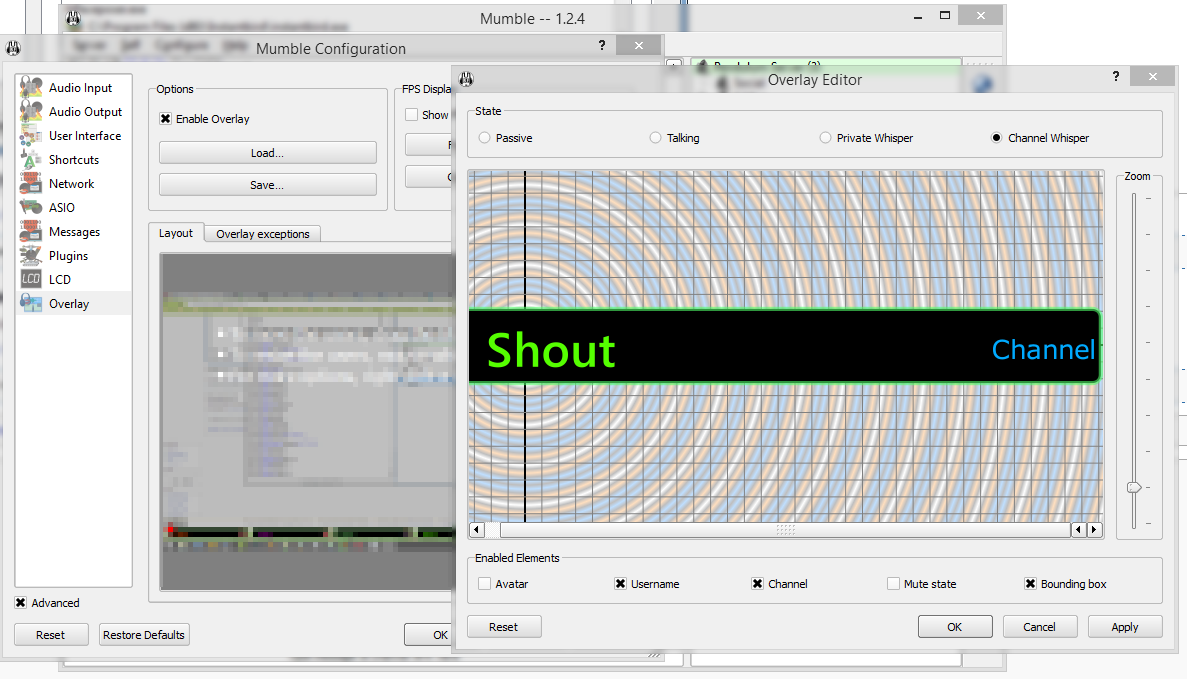 As many people have unfortunately stumbled upon this issue – Mumble‘s Overlay only works with OpenGL and DirectX9 and ONLY with 32bit (x86) executables. Running on anything else (DirectX11 and/or 64bit .exe) causes the overlay to not display over these games.

This can be seen, for example, in World of Warcraft – when run with DirectX 11 and the 64bit binary.

I was a bit annoyed by not knowing who is talking in our channel every time I play a game and we use Mumble, and I don’t own one of those fancy G15 “gaming” keyboards. So with the help of a friend, we made 2 little utilities: a DirectX and a OpenGL overlay holder for Mumble, and I also use it for whenever I want to play video games with www.proskins.io.

This version spawns a full-screen always-on-top window that can act as a surface for Mumble’s Overlay feature. This is compiled x86. It has a slight transparency so you can still see some stuff behind it.

It has rudimentary multiple-screen support – it takes only one parameter, the DisplayNumber that you wish to spawn it on. It defaults to 0 which corresponds to the Primary Dispay. If you want to spawn it on a Secondary or Tertiary screen, use 1 or 2, like:

The binary is compiled with SlimDX and is compressed into a single .exe with .NETZ. It requires .NET Framework 4.0 to run.

Please keep in mind this will NOT WORK with Games that run in FULL-SCREEN! You need to run the game either Windowed or Windowed Full-Screen! Also, due to the way the Mumble Overlay works, you have to run Mumble first THEN run this little utility. If your game doesn’t run in Windowed Full-Screen but runs simpy Windowed with Borders, you can force it borderless with ShiftWindow.

This version spawns a maximized black window that you can resize and place wherever you want. It’s less useful than the DirectX version, but it will work for basic purposes.

The binary is compiled with the Tao OpenGL Framework, it’s compressed with .NETZ. It only requires .NET Framework 2.0 to run.

So the OpenGL version seems to run as expected (except for not being resizable), and the overlay draws nicely. The DirectX 9 version, however, crashes on launch with a long error message (http://i.imgur.com/ybF99AK.png). I’ve got the .NET 4.0 runtime, and even tried installing the SlimDX runtime, with no luck. It does the same thing on every machine I’ve tested it on (XP x32 and a couple Win7 x64).

Could you try dropping this DLL file into the same directory as the .exe?
https://dl.dropboxusercontent.com/u/120650/Overlay/SlimDX.dll

The packer should take care of that, normally.

Thanks Znuff, that worked exactly as expected! Looks like .NETZ dropped the ball.

Thanks for the feedback. Indeed it seems that the packager somehow screwed up. Weird because I tested it on some systems and it worked.

I added the link to the .zipped exe+dll in the post.

I get the exact same error, yet I already have the dll in the directory

Turns out my error is different, here is mine: http://puu.sh/7DhFD.png

I’ve been looking for something like this. The OpenGL version works, but unfortunately, when I run the DirectX 9 version, the overlay never appears, and mumble becomes less responsive until it crashes about a minute after starting the holder. Upon further investigation, it appears that mumble starts to hog a bunch of memory once the holder is started, as can be seen by the blue curve here: http://i.imgur.com/jK1aS5g.png

Unfortunately I can’t reproduce this issue 🙁

I can’t tell you how awesome this is for Mumble, so first thing’s first…Thanks! So I play a web-based game called TagPro so this was key in getting the overlay to work with Chrome, however I have a friend who is experiencing a weird issue:

When he uses the DirectX overlay, instead of it being transparent it appears like the OpenGL overlay. The transparency is dark and he can barely see anything behind it. Here is what his screen looks like: http://imgur.com/8aZQWXO,5cZdM6v#1

We have tried messing with Mumble settings as well as re-downloading the overlay. Any help would be greatly appreciated!

I am not exactly sure.

It looks like your friend is using Windows Vista, that could be the root of his issue.

Unfortunately I don’t have access to Windows Vista to test it out :-/

Hmmm that is strange. Sounds like this is the first time you’ve run into this as well. I’ll let you know if we figure anything out. Either way thanks again for the overlay holder!

This is awesome. For whatever reason mumble overlay just would not work on my machine. This works great.

Ever wanted to upload a song to YouTube but you didn’t have...

Just having upgraded recently to Windows 8, I found that my on-board...

As many people have unfortunately stumbled upon this issue –...

A few days ago I found Osvaldas Valutis’ awesome ImageLightbox.js...